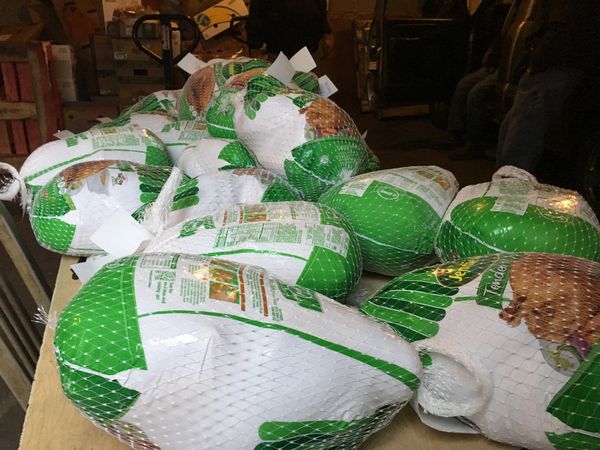 Posted at 16:05h in Fire Claims by Administrat0r
0 Likes

The boxes contained items such as a frozen turkey, macaroni and cheese, cranberry sauce, margarine, cake mix and napkins. The boxes were distributed Tuesday, Dec. 18.

“This Christmas basket (event) has been happening over 70 years,” said Michelle McGregor, president and chief executive officer of the community center. “We do this every year because this is our highlight, this is how we celebrate and continue to give back to the community.”

Some of the Christmas turkeys that will be given out to families at the Saginaw First Ward Community Center on Tuesday, Dec. 18.
“You never know what’s going on in a household with working (with) low-income, disadvantaged, dysfunctional or at-risk household,” Director of Operations Fred Harvey said. “It makes a lot of difference what you give to the families.”

He also added that this time of the year is a difficult time for many because of the weather, holiday season and other reasons.

“October to December can be very depressive moments,” he said. “We have a lot of guys come from the homeless shelter, families that’s been rearranged…. Never know what people are going through (but) you know coming through First Ward’s doors, everybody is somebody.”

The boxes of food were donated by Auburn Hills-based Michigan Fire Claims. The company is a licensed public adjuster that helps business owners and homeowners present and settle claims with insurance companies in the event of disaster, said Nik Kalaj, the president of the organization.

This is Michigan Fire Claims Inc.’s first time working with the First Ward Community Center, but they have helped out with many other organizations during the holidays in the past – Including in Saginaw at locations such as the East Side Soup Kitchen.

Matthew Slotka, vice president of the organization, said they are happy to help out and the real heroes are the leaders and volunteers at the center.

McGregor said the community center, which has been around for 87 years, helps with things like after-school programs and summer day camps for kids but they also have adult programs and things to help senior citizens as well.